How I became Scott Gimple’s Bitch

If you haven’t seen the season 7 premiere of The Walking Dead and don’t want any spoilers, stop here. Scroll to the next post or just GTFO. Seriously. 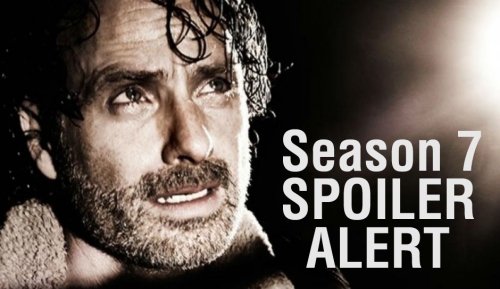 I’m not just a casual watcher of TWD. I’ve seen the entire series, more than once. As a matter of fact, we’re in a relationship. Nothing gets between us. Not even sleep. 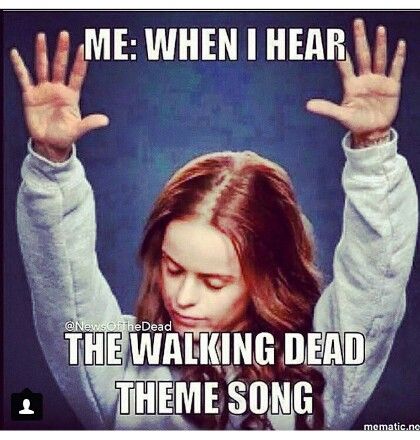 My love affair with TWD only waned once, back in season 3 with the whole Woodbury/Governor political snoozefest. (There are actual zombies in this zombie show, aren’t there?) I thought it might happen again going in to season 5, but luckily the whole Terminus fiasco thing didn’t drag on for too long. Nasty business that. But our relationship survived, it endured. Maybe it even got stronger. That is, until last April.

That was when Scott Gimple became the third wheel in our relationship and I, inadvertently, became his bitch. He barged in like some disgruntled BFF and left me hanging in the middle of a fucking scene with my beloved show. It was like it just went off to bed angry… for seven goddamned months! And in the middle of a really tense scene with the life of one of our own (literally) in the balance. What kind of show does that to a girl? Pfffft. 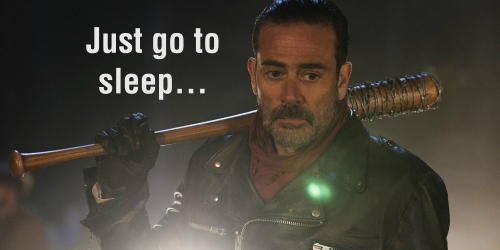 Now, I get it. Maybe TWD wanted to beef up our relationship a little. Add a little naughty spice to the mix. Rawr… I’m down for that. But all of a sudden, I’m in a classic baited case of whodunnit. Or, more precisely, who’d it get done (dun?) to. And I understand that. The whole Who shot JR bit, right? (You younguns can google how cliffhangers got started in the first place here.) And even then, at that point, I was still rolling with it. I mean, our bond is deep, we’ve invested in each other after all these years. If my show wants to kick it old-school and use a classic move, I have to give it a chance, don’t I? I just pretend like I haven’t seen it before. It’s the least I can do. Christ, we’re in love!

But then something happened. Something terribly unexpected. I started hearing things about my show. Strange things. I couldn’t even go online to my favourite nerd haunts without a bombardment of video evidence showing me what it had been up to behind my back. My precious show was being pulled apart, dissected, slowed-down and dismantled across the world. Some people were saying that it wasn’t even my show, that it was some sort of fucking comic book! They don’t know. They can’t know what we have together. 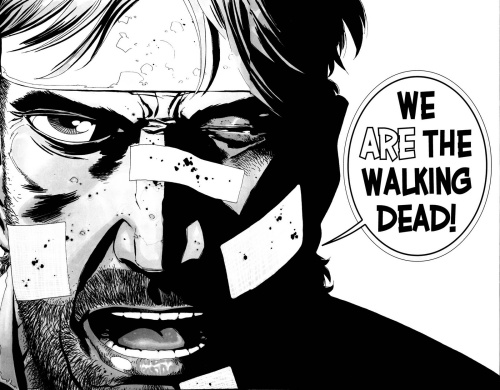 And of course, Gimple barged in again with authoratative responses to the chatter. He made statements about my show. He made promises. My show was coming back. It would be better than ever. Our reunion would be worth the pain of having it ripped away from me mid-sentence. But the underground gossip continued. For months it gnawed away at my better judgement. I was raised not to succumb to gossip. Not to feed the beast. But I was distraught. I needed to know what my show was up to. Maybe someone else had the answers. Maybe strangers could tell me and help me understand. I needed to know the truth. I didn’t trust Gimple. He didn’t care about our love. He was a numbers man, a corporate thug. His assured smile haunted my dreams. But he did promise! He said he left me hanging for a purpose. It would be better for us in the long run. He tied that delicious rabbit up on a stick and sent me round and round the track after it. 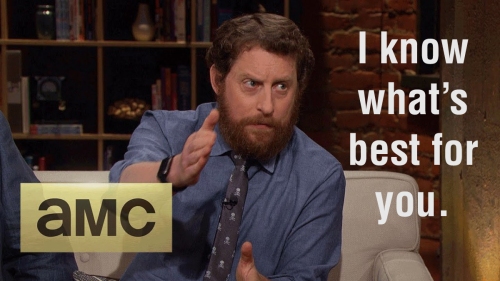 I gave him all of my control. I was tired. I just wanted my show back. I wanted everything to go back to the way it was before. That’s on me. No one made me that invested. But you do that in a relationship, don’t you? That’s commitment. But then one day, it dawned on me. This wasn’t about me or my show anymore. I had become Scott Gimple’s bitch. What the cockadoodie hell? How did that happen? I didn’t even like Ghost Rider!

I’ve since learned that it’s unhealthy to give away all your power. No one side should have that much control in a relationship. So, TWD and I are on a break. 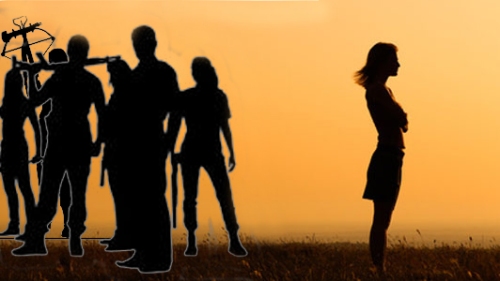 A little separation has shown me TWD’s true colours. Love is blind. TWD isn’t the show I first fell in love with. It used to be well-balanced. It definitely had a bad boy side, but it was also compassionate, gentle and loving. I mean, all relationships have some ugly moments, but you get through them. Together. You see the good in each other and fight for that. Somewhere along the way, my show got really dark. It lost compassion and that essence of humanity it once had. It lost the thing that held us all together. I mean, how could it smash Glenn the way it did for so fucking long? It’s like it liked it. It’s like it wanted more. Those scenes were just gratuitous gore. Indulgent even. It’s like Gimple fed my baby a slasher-porn biscuit filled with evil. It made me sick. THOSE ARE GLENN’S BRAINS GODDAMNED YOU! ABRAHAMS! It made my heart hurt that my precious show wanted to torture me with their brains spread out all over the ground like giant puddles of Grandma’s stew. They have to die, I get it. But this? That’s not right. How could I continue this love affair with my eyes wide open? <heavy sigh>

But Jesus, Dixon and Grimes, I do have some really great memories. We had some good times together. I hope one day we can be friends. RIP my loves. 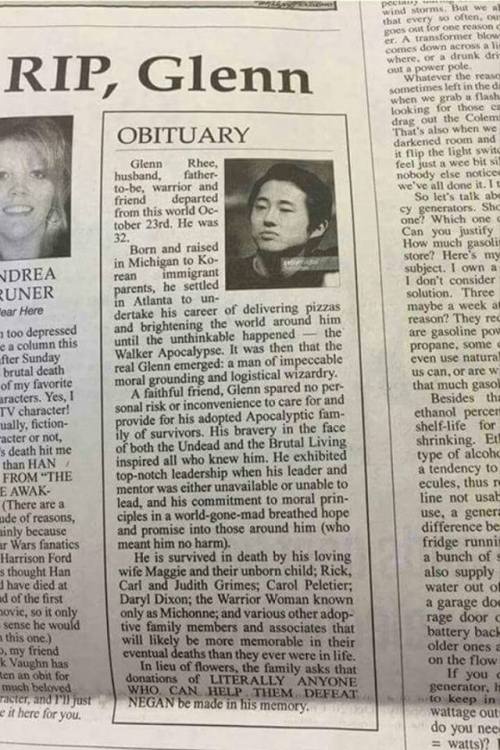 Schmooze with some of Hollywood’s biggest names at this year’s TIFF! 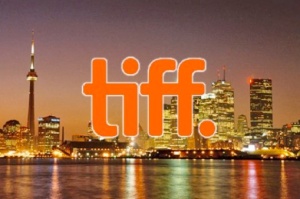 Longo’s is celebrating the first anniversary of their Toronto, Maple Leaf Square store (MLSFest) and they’re using social media sites to spread all kinds of excitement and fun with a contest!  They are giving their customers the exclusive opportunity to rub elbows with Film Festival elite!

MLSFest kicked off Friday offering customers of the Maple Leaf Square store the opportunity to WIN two tickets to a Toronto film festival (industry-only) premiere screening and after-party on the evening of September 9th, 2011!

Check out the contest details on this page and then hurry down to their MLS store and either checkin on Foursquare, grab the photo of the day and Tweet the image or upload it to Facebook to enter.  OR… do all three!

MLSFest will continue throughout the month of September and on into October with additional promotions, special offers and giveaways—including the opportunity to WIN tickets to more Film Festival events!

Get down to the Maple Leaf Square store and become part of the celebration!